Edit
watch 01:36
We're Getting Mutants in the MCU - The Loop
Do you like this video?
Play Sound

They are special, talented personnel whose skills from their previous lines of work are used for the efficiency of the organisation in areas of field duty, communications and medical service.

Each officer wears a special uniform bearing their respective colour code-name, which includes a radio cap and a pistol. They also have a security pass to reveal their identification.

Captain Black
(Conrad Turner)
Field Officer
(formerly, before being taken over by the Mysterons) 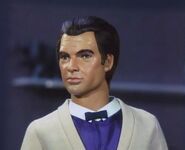 NOTE: Neither Captain Brown's nor Captain Indigo's real name is ever specified in OCS.

Colonel White is the Commander-in-Chief, or CINCSPEC, and in charge of all the personnel. The officers always report to him for their missions or any other forms of work. Colonel White holds his personnel in high regard, stating that they are "great men" and the "World's Finest."

Senior officer Captain Black is said to have recruited most of these officers, with Captain Scarlet being his most prized pupil, especially since having acquired the power of Retro-metabolism and thereby having become "virtually indestructible," in consequence of which Captain Scarlet has also become the most frequent "field commander" of Spectrum's various missions in Earth's "war of nerves" against the Mysterons.