Captain Scarlet And The Mysterons
Register
Don't have an account?
Sign In
Advertisement
in: Spacecraft, OCS Spacecraft

The Martian Exploration Vehicle, or MEV, was a space exploration vehicle aboard which Spectrum officer Captain Black, as per his assignment, was searching for the origins of radio signals that had been monitored at the Spectrum Organisation as part of the second Zero-X Mission on Mars.

However, Captain Black made the grave mistake of committing an illegal, unprovoked attack against the Mysterons, when he mistook a surveillance camera from their complex as a weapon and panicked, starting the Mysterons' War of Nerves against the Earth. 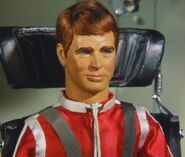