Captain Scarlet and the Return of the Mysterons

The trailer begins at a graveyard, where the voice of the Mysterons announces that they are resuming their war of nerves, saying humanity will pay for the unprovoked attack on them, warning they will strike when Earthmen least expect it. At Captain Black's grave, he breaks out of his coffin and rises up. The scene cuts to Cloudbase, where a narration from an elderly Captain Blue begins. He explains that within hours of the Mysterons renewing their threat to the people of Earth, the Spectrum Organisation had begun re-assembling their top agents at Cloudbase HQ in readiness for fresh conflict with the old enemy. He and Captain Scarlet arrived ahead of time.

The SPV catches up with the Saloon and, once he has driven past it, Captain Scarlet ejects from the SPV and fires at the Saloon with his pistol. The Saloon drives off course, but Captain Blue manages to jump out before it drives off the edge of a cliff, where it plummets to the ground and explodes. Captain Blue, shocked back to the real world, meets up with Captain Scarlet and decides that what has happened is enough excitement for one day. Meanwhile, Captain Black stands among the smoking wreckage of the Saloon. After the endcap, Captain Scarlet addresses the audience, "And this is just the beginning, S.I.G." 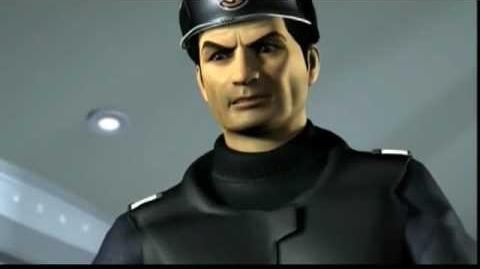